Training Schools within the framework of the Action topic are aimed at:
• Widening the knowledge of the Action activities.
• Providing intensive training on a new and emerging subject.
• Offering familiarisation with unique equipment or know how in one of the laboratories of the Action.
Training Schools are not intended to provide general training or education. Those attending a Training School are typically – but not exclusively – young researchers from across Europe. Furthermore, Training Schools may also cover appropriate re-training as part of life-long learning. A Training School can also take the form of an Early Stage Researchers (less than PhD + 8 years) network created as a "think tank". COST support covers organisation of the school and participation support to both trainers (including external experts) and trainees.

Duration: between three days and two weeks
Eligible costs: local organiser (see local organiser support), Trainers (travel and substistence for trainers – same as for participants to COST meetings, Trainees (individuals grants, decided by MC but cannot exceed the normal reimbursement rates of COST
Local Organiser: Request for a TS has to be sent via the Chair to the MC after MC approval of the programme and the list of paid participants to the Grant Holder
Trainers and Trainees: Register on the e-COST application

Invitation Flyer for the Warsaw Training School 2013 and Application form. 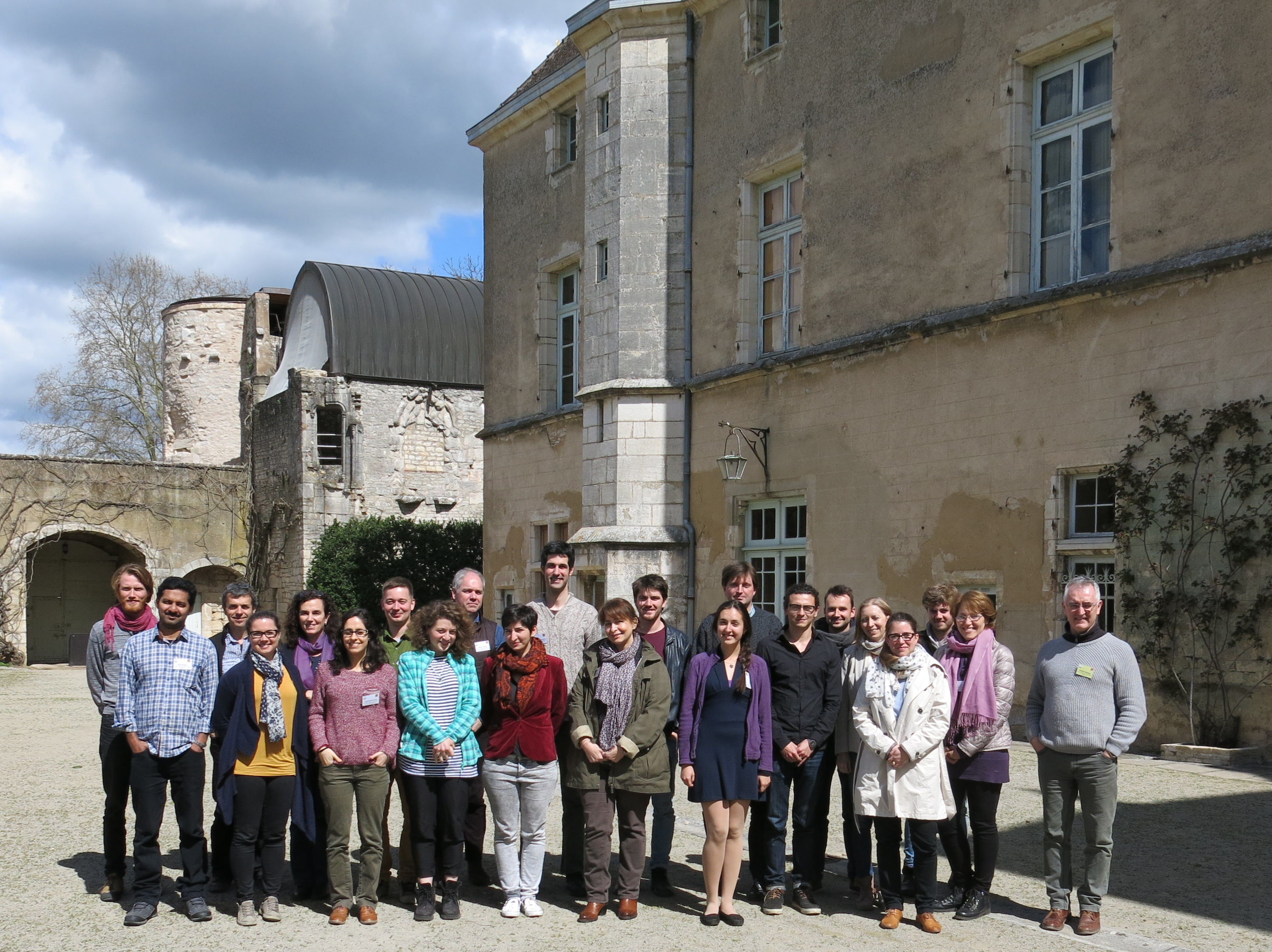 Participants of the Training School in Germolles.

The 2014 COSCH Training School on "Hyperspectral imaging – Techniques applied to the investigation of 2D polychrome surfaces" was organized in Florence by the IFAC-CNR Applied Spectroscopy research group. The idea of the Training School was to provide a general overview of hyperspectral technologies for artworks investigations, mainly paintings. The program was multidisciplinary and took into consideration different approaches to the topic in order to meet the needs of the diverse professionals working in and competences applied to this field.

The class included 16 participants, who had different backgrounds and came from various European countries, thus resulting in a wide representation of fields and nationalities, thus making it a multi-disciplinary group inclined to discuss and exchange ideas on the application of hyper-spectral imaging techniques to the investigation of paintings and other art objects.

The three days program (10-12 December 2014) aimed at offering manifold inputs on the various topics encompassed, starting from the main technological issues up to the conservative problems, including some information about data processing and data access. The program was structured into two main parts: traditional lectures, held at the Florentine CNR premises, and training classes in conservation laboratories. The latter included visits to the INO-CNR and IFAC-CNR imaging laboratories located at the Opificio delle Pietre Dure (OPD) and the Soprintendenza Speciale per il Patrimonio Storico, Artistico ed Etnoantropologico e per il Polo Museale della città di Firenze (SSPSAE), respectively, as well as a guided tour of the Museum of San Marco and the SSPSAE conservation laboratory. Class discussions, labs and museum tours contributed to creating a friendly and informal atmosphere among the participants; it was further enhanced during two social events planned for the first and second evenings of the event (a pizza on Wednesday and a Welcome Party on Thursday).

The first day was entirely devoted to class lectures. After a general introduction of multiband, multispectral and hyperspectral imaging methodologies and their use in conservation science, a review of artistic materials, with a focus on their spectral fingerprints in the visible and near infrared regions was given. The second part of the day focused on technological aspects of hyperspectral imaging, with an overview of different techniques and devices, and an in-depth introduction of the IFAC-CNR hyperspectral scanner. Subsequently, data processing methodologies and related questions were illustrated with an informative discussion on some of the most relevant algorithms for processing data acquired on actual paintings. Finally, selected case studies were illustrated.

The second day was more practice oriented, i.e. geared toward demonstrating the application of the methodologies in practice. In the morning the software platform CRISTINA (CNR Retrieval of Images from hyper-Spectral data Through Interactive Network Access), developed at IFAC-CNR with the aim of providing a user-friendly access to hyperspectral data, was presented. This topic became the starting point for introducing class discussion on issues and problems related to hyperspectral data usability, adaptability, and access to end-users. Thanks to the widely diverse backgrounds of the participants, an intense and stimulated discussion was originated.

In the afternoon the class moved to the Conservation Laboratories of the OPD where the trainees guided by the coordinator of the INO-CNR Art Diagnostic Group, Dr. Raffaella Fontana, saw the INO-CNR multispectral imaging system in action. This system has normally been used to inspect paintings under conservation / restoration at the OPD. The visit terminated with a short tour of the OPD conservation / restoration ateliers.

The third day started with the tour of the Museum of San Marco under the invaluable guidance of the Museum Director, Dr. Magnolia Scuderi. The Museum, which hosts some of the most important artworks by Beato Angelico, thanks to its Director, is one of the most active museums of Florence in creating stimulating collaborations with scientific research groups.

The Training School ended with a visit to the SSPSAE conservations laboratories, a facility in the Uffizi Gallery building, where the IFAC-CNR scanner is normally stationed to acquire images on paintings under conservation / restoration. The visit included a practical demonstration of scanner acquisition on a painting and a presentation given by the painting conservators, Marina Ginanni and Elena Prandi, focused on practical methods and techniques used in the laboratory to preserve and restore precious and rare paintings.

At the end of the visit, Dr. Marcello Picollo, on behalf of the local organizing Committee, concluded the Training School thanking all the colleagues who had contributed to the organization of this event and all the trainees for their enthusiastic participation. He expressed his fervent wish that this experience would initiate new scientific collaborations and be a starting point for establishing relationships, new contacts and ideas among the participants and the hosting institution. Finally, COST COSCH Action was warmly acknowledged!

Participants of the Training School in Florence.